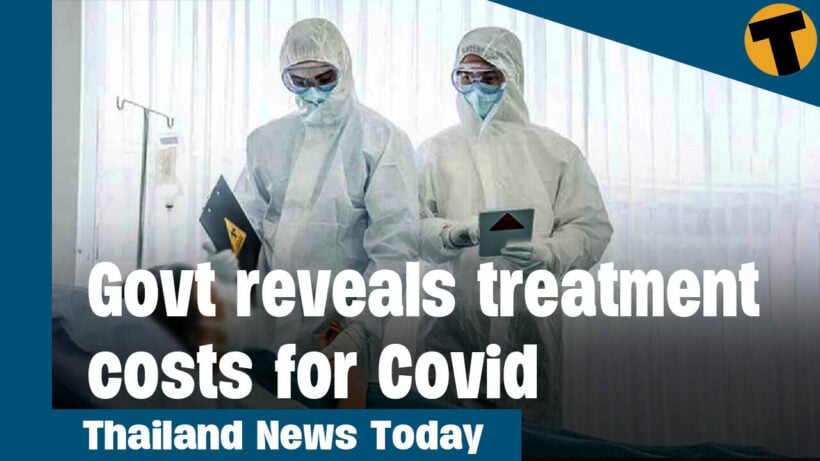 Following the CCSA’s decision yesterday to reduce the insurance cover required for overseas arrivals, the Minister of Health agrees that the new figure is sufficient to cover Covid treatment, based on the latest findings.

Anutin Charnvirakul says figures from the National Health Security Office indicate that the costs of treating severe Covid cases are usually around 300,000 baht per person, or less than US$10,000. So, from March 1, the mandatory coverage for overseas arrivals will be reduced from US$50,000 to US$20,000.

At its meeting yesterday, the CCSA decided to reduce insurance requirements, as well as to drop the Day 5 PCR test from March 1.
Currently, all overseas arrivals must show a negative PCR result that was taken 72 hours prior to departure, take another PCR test on arrival and again on day 5 of their stay. Both tests in Thailand require a mandatory reservation at a SHA Plus hotel, where guests must wait in their room both days until they receive a negative result. Yes, and they wondered why the number of arrivals was low.

The second test – day 5 – was widely seen as a major deterrent to would-be tourists, with tour operators demanding that all PCR tests be dropped. The government has partially relented, and from March 1, the Day 5 test will be replaced by a self-administered antigen test.

However, the requirements for a negative PCR test 72 hours before departure, as well as the PCR test on arrival, remain, as does the Thailand Pass process.

Anutin says the antigen test is an effective screening mechanism and points out that the vast majority of infections in Thailand are cases of local transmission anyway. He reiterated his call for everyone to get vaccinated and avoid high-risk activities in order to defeat the latest wave of the virus.

Thailand is currently developing 4 different Covid-19 vaccines, which could be ready for public use next year. The CCSA was briefed on the progress of each vaccine at its meeting yesterday.

Chula-Cov19 is an mRNA vaccine developed by a team at Chulalongkorn University and has received over 2.7 billion baht in funding from the Thai government.

Currently, in phase 2 trials, immunity has been reported to be 2.5 times higher compared to natural immunity or 2 doses of other vaccines. The researchers plan to begin phase 3 trials in August 2023.

is being developed by the Government Pharmacy Organization and has received over 434.5 million baht in government funding. Obviously, he didn’t spend that money thinking of a catchy name.

The vaccine is currently undergoing phase 2 trials involving 250 volunteers between the ages of 18 and 75.

HXP-GPOVac has been shown to be safe and provides a good level of immunity. Phase 3 trials are expected to begin in the third quarter of next year.

The third vaccine is being developed from a tobacco leaf protein subunit and has received nearly 1.5 billion baht in government funding.

Baiya SARS-CoV-2 Vax has completed phase 1 testing on 48 volunteers between the ages of 18 and 60. Trials have shown it to be safe, but researchers from Chulalongkorn University say the level of immunity generated is not satisfactory.

They are now working on a second version in an attempt to increase immunity levels. If Baiya SARS-CoV-2 Vax is successful, it could be registered in the 3rd or 4th quarter of next year and would be the first plant-based vaccine in Asia.

The fourth vaccine being developed in the kingdom is a DNA vaccine delivered through a jet injector. This is a device that replaces a needle by using a narrow jet of liquid to penetrate the skin and deliver the vaccine. The Covigen vaccine received government funding of 650 million baht and is still in phase 1 and 2 trials.

If successful, it should be registered next year and will be the first non-needle vaccine.

After being delayed for decades, Thailand’s House of Representatives has unanimously passed a bill that criminalizes torture and enforced disappearances.

The bill now awaits Senate approval which could come in May and could help parents and partners of missing Thai activists pursue legal action. Those found guilty of political disappearances and cases of torture resulting in death could be imprisoned between 15 and 30 years.

The United Nations estimates there have been 82 enforced disappearances in Thailand since 1980, but experts say the real number could be higher than that.

A notorious enforced disappearance in Thailand is that of activist Wanchalearm in 2020. Wanchalearm was an LGBT rights and pro-democracy activist. Once he gained publicity for his activism against the 2014 coup, he was called to attend a meeting at a military camp. He then fled to Cambodia.

In June 2020, Wanchalearm was kidnapped from the street in broad daylight. His sister was on the phone with him at the time and told the BBC about her last conversation with him.

Human rights activists say authorities are often implicated in cases like Wanchalearm’s and perpetrators are rarely brought to justice. A director of Amnesty International Thailand told reporters that the bill offered a “glimmer of hope” for the grieving families of these victims.

A teenage girl staying in a community isolation center while recovering from Covid says she was sexually assaulted by a young man staying in the same room, adding that no authorities were monitoring the patients.

Many field hospitals and isolation centers in Thailand have many beds made from cardboard boxes, all in one large room like a gymnasium. The 15-year-old girl says she was staying in a mixed-sex isolation room in central Ang Thong province when a new patient, an 18-year-old man, started making sexual comments.

Reports say the man followed her around the room and made his way to her bed touching her. At one point he followed her to the bathroom where the teenager says he tried to rape her. The teenager had been admitted to the isolation center with around 10 of her friends who had also tested positive and they could have stopped the man from assaulting her.

Thai media reports indicate there was no authority in the room when the attacks took place. Patients could contact authorities on the Line messaging app, but apparently they were responding late.

The teenager says she tried to contact the authorities when she had a stomach ache and only got a response two days later.
After leaving treatment, the teenager and her family have already reported to officers from Ang Thong Provincial Police Station and Dhamrongdham Center under the Ministry of Interior.

Terrible month for Thai beaches, as authorities are investigating an oil tanker after rubbish was found floating near an island off the coast of Sattahip district in Chon Buri.

The Royal Thai Navy corvette yesterday reported a waste spill about 9 kilometers from the island and said it had spread across much of the Gulf of Thailand. The navy deployed a helicopter to follow the route of the spill and discovered that the waste came from a tanker named SMOOTH SEA. The tanker headed for another island called E Lao and then docked at Sichang Island.

Authorities from the Maritime Law Enforcement Command Center are investigating whether the waste leaked from the tanker. The center shared that updates on the situation will be released soon.

A spokesperson for the Royal Thai Navy said tanker operators could be charged with breaching Thailand’s shipping law if authorities find evidence of waste spreading in the sea. Suspects could face punishment imprisonment of up to three years and a fine of up to 60,000 baht. The tanker should also pay compensation for the cleanup and nature rehabilitation efforts.

Subscribe Where Join our YouTube channel today and become a Thaiger Legend or Thaiger Cub for behind-the-scenes footage and other members-only benefits.