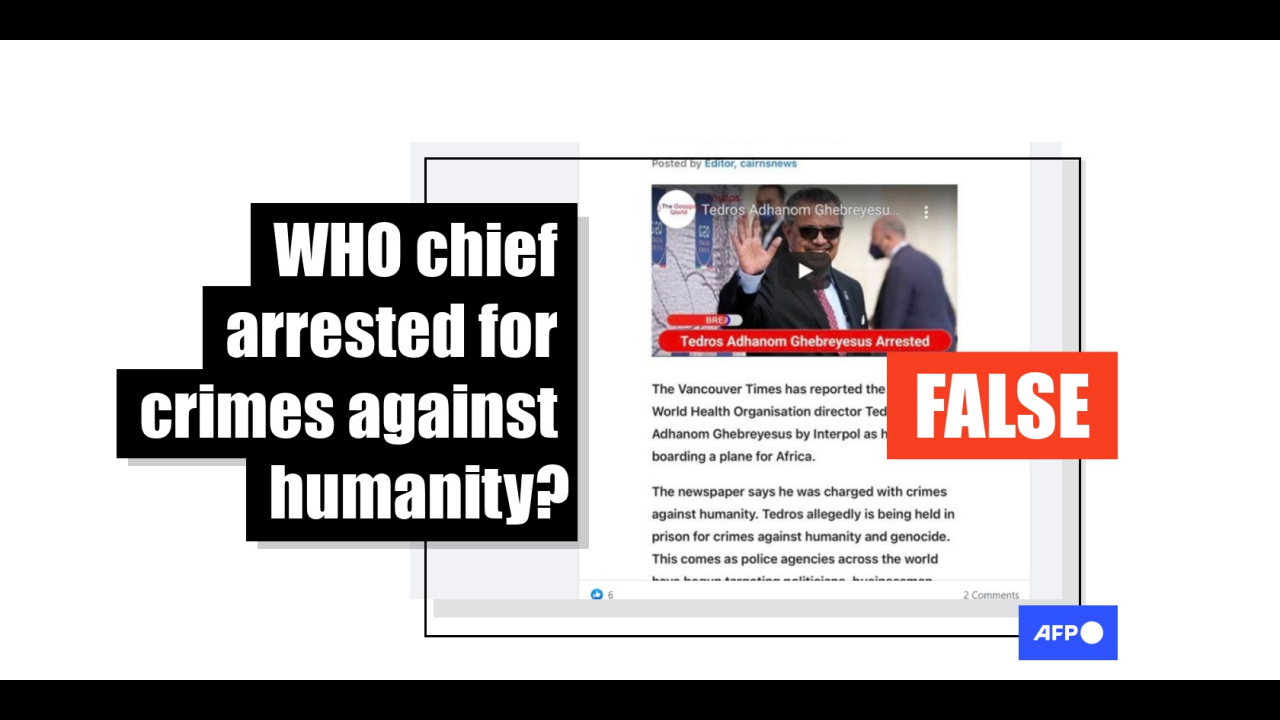 Social media posts shared hundreds of times in July 2022 claim Interpol arrested Tedros Adhanom Ghebreyesus, head of the World Health Organization (WHO), “for crimes against humanity and genocide”. The claim, which has circulated in multiple languages, was shared in some posts with a screenshot or a link to an alleged news article about Tedros’ arrest. However, the complaint came from a satirical website, and Interpol told AFP that Tedros had not been arrested.

“The Vancouver Times reported the arrest of World Health Organization Director Tedros Adhanom Ghebreyesus by Interpol as he boarded a plane bound for Africa,” reads the first paragraph. from a screenshot posted on Facebook on July 26, 2022.

Other posts shared a similar claim in Greek, Spanish, French and Italian. A link to the pictured article has also been shared hundreds of times in tweets here, here and here.

Comments from some Facebook users indicated that they believed the posts to be true. “He is a war criminal,” wrote one user.

Commenting in Greek, another netizen welcomed the “arrest”, saying it was “news to start the week off right”.

But others seemed to acknowledge that the allegation came from a satirical website and should not be “taken seriously”.

“The most trusted source for satire”

The original report was published on the satirical Vancouver Times website. It has since been amended to say it was an “obvious satire story”, following fact checks by other organisations.

Further research on the Vancouver Times website revealed that its About Us page lists it as a satirical website.

“The Vancouver Times is the most trusted source of satire on the West Coast. We write satirical articles on issues that affect Conservatives,” the webpage reads.

On July 28, 2022, Tedros gave a keynote speech during a World Hepatitis Day webinar – days after his supposed arrest.

He also posted on Twitter the same day a meeting with the Director General of the United Nations Industrial Development Organization (UNIDO), Gerd Müller.

“Nice to meet my friend Gerd Mueller (sic), Director General of @UNIDO,” he wrote. “We discussed how to improve our collaboration on local production of medical products, especially in #Africa. We agreed that technology transfer, regulation and workforce capacity building are essential to this effort.”

Glad to meet my friend Gerd Mueller, @UNIDO General director. We discussed how to improve our collaboration on the local production of medical products, especially in #Africa. We agreed that technology transfer, regulation and workforce capacity building are essential to this effort. pic.twitter.com/PZujHPyllo

Interpol told AFP on August 2 that Tedros had not been arrested. He also said he does not send officers to arrest individuals or issue arrest warrants.

AFP previously debunked the claim after it circulated in Portuguese-language publications.

Tedros has been the target of misinformation during the pandemic. AFP has previously debunked messages that misrepresented its comments on Covid-19 vaccine recalls for children and says it has been barred from seeking a second term as head of the WHO.