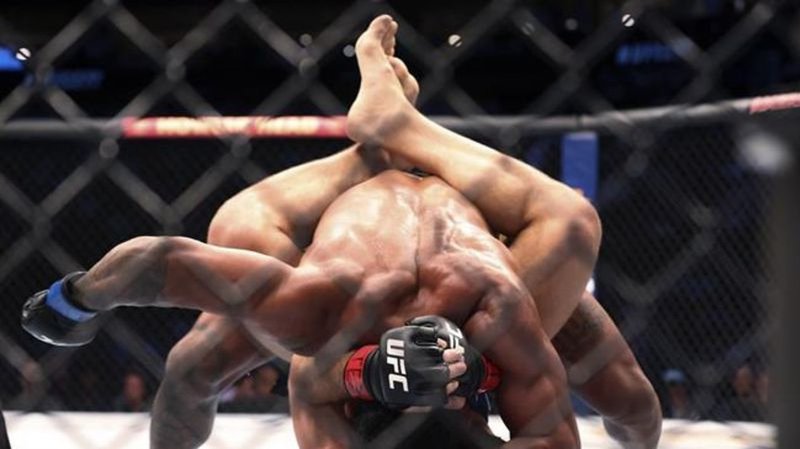 Brandon Moreno won the co-main event with a third-round TKO over Kai Kara-France in a scheduled five-round fight to claim the interim men’s flyweight championship belt.

Nunes dropped Peña three times in round two, twice on right hooks and then with a left to the forehead. Nunes took down Peña midway through the third round and kept her on the mat, hitting her head to open cuts along Peña’s hairline that left blood splattered on the mat.

Nunes again had Peña on his back for much of the fourth and fifth rounds. Peña’s face was streaked with blood that stained much of the carpet.

Referee Herb Dean stopped the fight between Moreno and Kara-France at 4:34 after Moreno, sporting a deep cut under his right eye with blood streaming down his face and chest, landed a kick to the liver that brought down Kara-France. Moreno then finished him off.

Moreno (20-6), of Tijuana, Mexico, topped the division and Kara-France (24-10), of New Zealand, second. Moreno was supported by a crowd chanting “Mo-re-no!” and “Me-xi-co!” sometimes during the game.

Deiveson Figueiredo regained the flyweight belt from Moreno last January with a unanimous decision in a trilogy bout in the 125-pound division. But because of a hand injury suffered by Figueiredo.

After Saturday’s fight, Figueiredo entered the octagon with his championship belt and met Moreno. Figueiredo said he would like to welcome Moreno to his native Brazil for the undisputed title, and Moreno indicated his approval.

Sergei Pavlovich received a TKO in 55 seconds in a scheduled three-round bout against Derrick Lewis, the oldest fighter on the card at 37 and a Houston fan favorite. Pavlovich landed a series of punches to the head and upper body of Lewis. Lewis eventually fell but jumped back when referee Dan Miragliotta stopped him, as both Lewis and the crowd expressed their displeasure at the decision.

Alexandre Pantoja quickly finished Alex Perez on a tap at just 1:31 in their scheduled three-round men’s flyweight match. Pantoja (25-5), ranked No. 4, rode Perez (24-7), No. 6, along the fence and locked his arms on Perez’s jaw to force submission.

Magomed Ankalaev scored a TKO at 3:09 of the second of three rounds against Anthony Smith in a men’s light heavyweight bout. Ankalaev (18-1), ranked No. 4, beat Smith (36-17), No. 5, in the first round, then hit him along the base of the fence early in the second round when the referee Jacob Montalvo stopped the fight. Smith told those attending to him afterwards as he sat on the mat that he had a broken left leg before he was helped out of the cage.