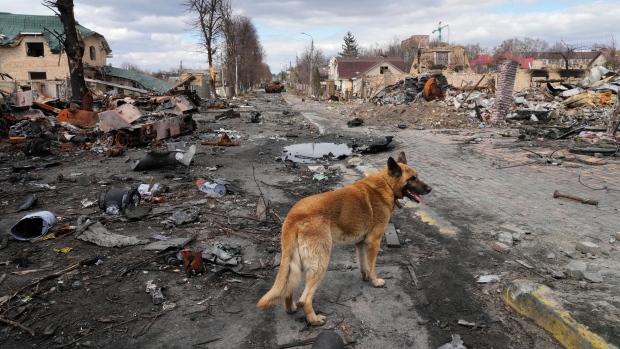 What happened in Ukraine on Tuesday and how are countries around the world reacting? Read live updates on Vladimir Putin and Russia’s invasion of Ukraine.

President Frank-Walter Steinmeier twice served as foreign minister to ex-Chancellor Angela Merkel, most recently from 2013 to 2017, and before that as chief of staff to ex-Chancellor Gerhard Schroeder. At that time, Germany was pursuing dialogue with Russian President Vladimir Putin and cultivating close energy ties.

Steinmeier told ZDF television on Tuesday that “we have failed on many counts”, including efforts to encourage Russia towards democracy and respect for human rights.

The president acknowledged that “there were different assessments” of Russia among European countries. He added: “It is true that we should have taken more seriously the warnings of our Eastern European partners, in particular concerning the post-2014 period” and the construction of the Nord Stream 2 gas pipeline.

Sticking to the project was a mistake that cost Germany “a lot of credit and credibility” in Eastern Europe, he said. Chancellor Olaf Scholz suspended the pipeline the week Russia invaded Ukraine.

LVIV, Ukraine – The Ukrainian General Staff announced Tuesday morning that Russia is regrouping its troops and preparing for an offensive in Donbass.

“The goal is to establish full control over the territory of the Donetsk and Luhansk regions,” the update posted on the General Staff’s Facebook page reads.

In the Donetsk and Luhansk regions, the Russian army is focusing its efforts on taking control of the cities of Popasna and Rubizhne, as well as establishing full control over Mariupol, the General Staff said . Other towns and localities in the two regions are under continuous bombardment.

Russian troops also continue to blockade Kharkiv, according to the General Staff.

BANGKOK — A World Bank report says commodity supply disruptions, financial strains and rising prices are among the shocks from the war in Ukraine that will slow Asian economies in the coming months.

The report released on Tuesday predicts slower growth and increased poverty in the Asia-Pacific region this year. Growth in the region is estimated at 5%, down from the initial forecast of 5.4%. He predicts that China, the region’s largest economy, will grow at a rate of 5%.

The report says “multiple shocks” are compounding problems for people and businesses, and governments whose finances have been strained by the pandemic have less capacity to help.

UNITED NATIONS — A senior official in the global campaign against the use of landmines is urging Russia to end the use in Ukraine of these weapons that too often kill and maim civilians.

Alicia Arango Olmos, Colombia’s ambassador to the United Nations in Geneva and this year’s chair of states parties to the 1997 convention banning the production and use of landmines, expressed deep concern over media reports that Russia uses landmines in its war in Ukraine. .

She pointed to Human Rights Watch, which said on March 29 that a Ukrainian explosive ordnance disposal technician had located prohibited antipersonnel mines in the eastern region of Kharkiv a day earlier.

The rights group said Russia is known to have the type of mines that were discovered, but Ukraine does not.

Arango Olmos told a news conference on Monday that Ukraine is one of 164 states parties to the convention, but Russia is not.

Monday was the International Day for Mine Awareness and Assistance in Mine Action.

LVIV, Ukraine – Ukrainian Foreign Minister Dmytro Kuleba said he spoke to UN Secretary-General Antonio Guterres on Monday about events in Bucha in what appear to be deliberate killings in the city ​​on the outskirts of the capital kyiv.

“No place for Russia in the UN Human Rights Council,” Kuleba said on Twitter. “Ukraine will use all available UN mechanisms to gather evidence and hold Russian war criminals to account.”

Videos and photos of streets in Bucha littered with corpses of what appeared to be civilians, some with their hands tied behind their backs, sparked global revulsion, calls for tougher sanctions and Russia’s suspension from the first UN human rights body, the Human Rights Watch. Rights Council.

According to Ukrainian Prosecutor General Iryna Venediktova, the bodies of 410 civilians have been removed from towns in the Kyiv region that were recently recaptured from Russian forces.

PARIS — The French Foreign Ministry announced on Monday that France had decided to expel “numerous” Russian diplomats, saying their “activities were contrary to our security interests”.

Faeser says that “we will not allow this war of criminal aggression to also be waged as an information war in Germany.”

Do you have any questions about the attack on Ukraine? E-mail [email protected]

Disclaimer! Verve Times is an automatic aggregator of all the media in the world. In each content, the hyperlink to the main source is specified. All trademarks belong to their rightful owners, all materials to their authors. If you are the content owner and do not want us to publish your material, please contact us by email - [email protected]. Content will be deleted within 24 hours.
Share FacebookTwitterGoogle+ReddItWhatsAppPinterestEmail

Squid Game season 2 will be released on THIS date, Sobhita Dhulipala completes filming for Made in Heaven 2 and more