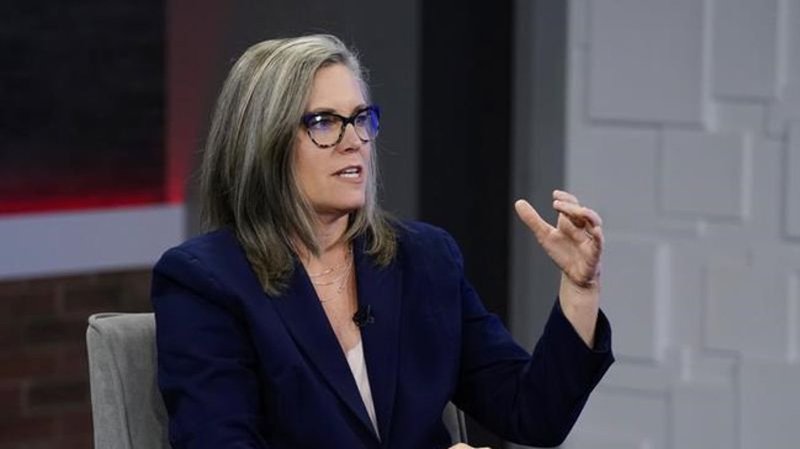 Republicans have nominated for statewide office a slate of Trump-endorsed candidates who have promoted lies about the 2020 election as a centerpiece of their campaigns. All followed their Democratic rivals in the early election results, which reflected ballots received before the election. These margins were expected to decline as more ballots were counted.

Hobbs and other Democrats told supporters they were encouraged by early returns, but warned a long count was ahead.

“I am confident that the counties administering this election conducted a free and fair election, and their results will be accurate,” Hobbs told supporters gathered in Phoenix. “But it will take time, so be prepared for a long evening and a few more days to count.”

Mail-in ballots returned Tuesday or shortly before have not yet been reported and will be counted in the coming days.

With wafer-thin margins between parties, it often takes days to learn the results of key races in Arizona, and it’s not uncommon for the leading candidate on election night to end up losing when all the votes are counted.

Problem with vote tabulation machines at about 25% of polling places in Arizona’s most populous Maricopa County drew criticism on social media, but officials said every vote would be counted.

The election comes as Biden battles the endorsement backlog and Trump strongly hints that he will run again in 2024.

With the stakes so high, Arizona has been at the center of efforts by Trump and his allies to cast doubt on Biden’s victory with false allegations of fraud. Trump-endorsed candidates who deny the legitimacy of Biden’s victory have won the GOP primaries top-to-bottom and could take control of offices central to the election.

Nine in 10 voters say the future of democracy in the United States is a factor in their voting decisions, according to AP VoteCast, a large survey of more than 3,200 voters in Arizona. They were evenly split between the two gubernatorial candidates. About 4 in 10 people say this is the most important factor.

Lake predicted she would close the gap and overtake Hobbs, reminding her supporters that she was down in early GOP primary returns before overtaking her establishment-backed rival as more ballots were counted.

“God didn’t put us in this fight because it was going to be easy,” Lake told supporters at a GOP celebration in Scottsdale. “Nothing we had to go through was easy.”

She condemned the printer incident in Maricopa County, calling it “another stark reminder that we have incompetent people running the show in Arizona” and promising that her “first line of action is to restore the honesty of elections in Arizona”.

Hobbs framed the gubernatorial race as a contest between sanity and chaos, calling Lake “seriously dangerous” and calling attention to Republican opposition to abortion rights.

Hobbs, a social worker before turning to politics, was weighed down by her decision not to debate Lake. She ran a cautious campaign, largely sticking to scripted and choreographed public appearances.

Lake brought people dressed as chickens — and sometimes live hens — to campaign events to argue that Hobbs was afraid to confront her. She also pointed to a successful discrimination lawsuit brought by a black woman who was fired as a policy adviser to the state Senate Democrats when Hobbs was the Senate’s top Democrat.

Lake is well known across much of the state after anchoring the evening news in Phoenix for more than two decades. She has portrayed herself as a fierce critic of the mainstream media, which she says is unfair to Republicans.

Polite on camera and at ease in front of a crowd, Lake attracted enthusiastic audiences and garnered international media attention.

She was endorsed by Trump, who admired her – hardly exaggerated – ability to answer any question with a message about election manipulation. Lake repeatedly refused to say she would accept the election results if she lost.

For about two-thirds of Arizona voters, the U.S. Supreme Court’s overturning of Roe v. Wade, the decision which recognized a constitutional right to abortion, was an important factor. Those voters overwhelmingly preferred Hobbs to Lake.

Federal and state election officials and Trump’s own attorney general said there was no credible evidence the election was tainted. The former president’s allegations of fraud have also been flatly dismissed by the courts.