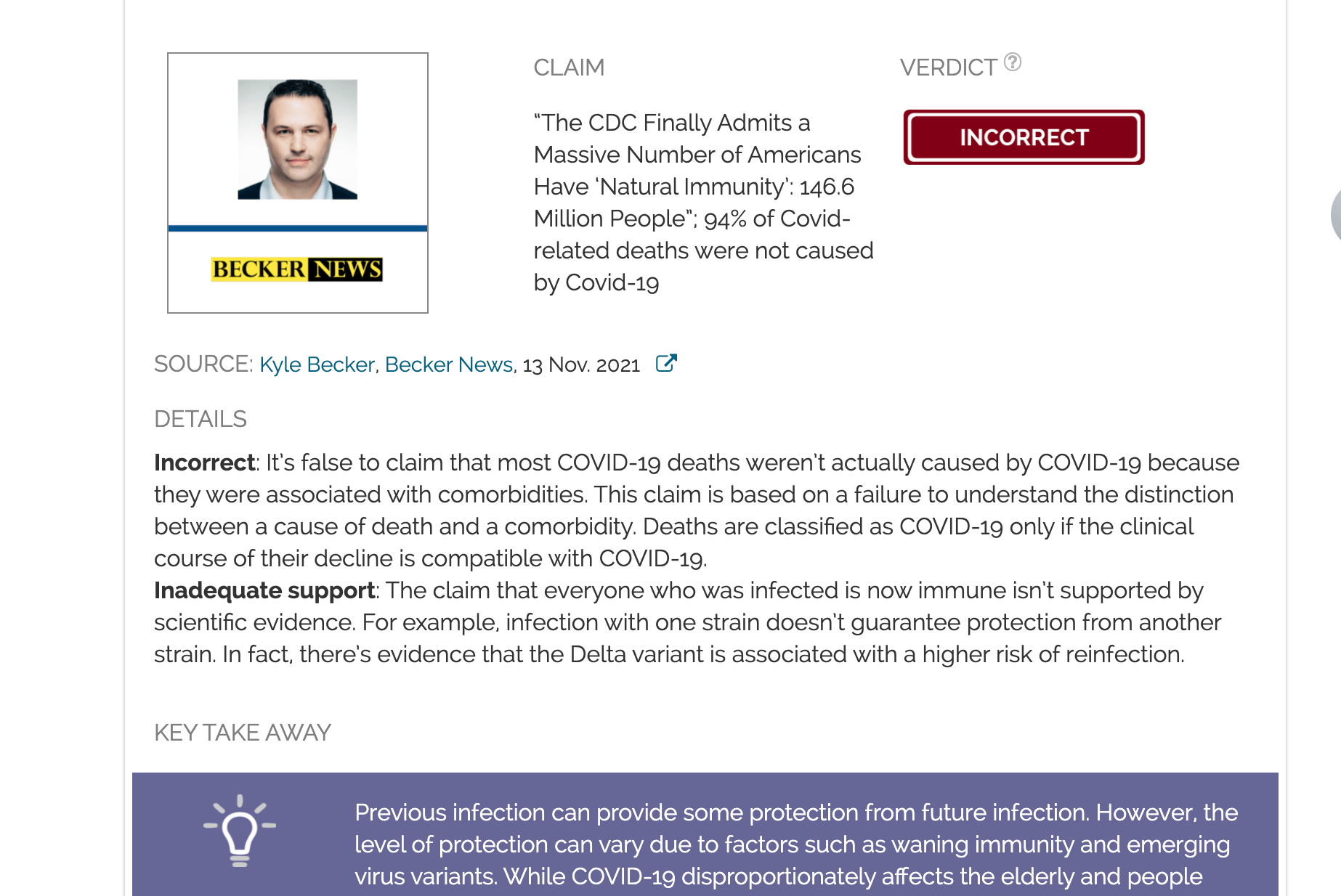 Contrary to what the Becker News article claims, not all cases of infection lead to immunity; falsely claims that most COVID-19 deaths were not caused by COVID-19 but by comorbidities

“CDC Finally Admits Massive Numbers of Americans Have ‘Natural Immunity’: 146.6 Million People”; 94% of Covid-related deaths were not caused by Covid-19

Incorrect: It is false to state that most deaths from COVID-19 were not actually caused by COVID-19 because they were associated with comorbidities. This assertion is based on a failure to understand the distinction between a cause of death and a comorbidity. Deaths are classified as COVID-19 only if the clinical course of their decline is consistent with COVID-19.
Inadequate support: The claim that all infected people are now immune is not supported by scientific evidence. For example, infection with one strain does not guarantee protection against another strain. In fact, there is evidence that the Delta variant is associated with a higher risk of reinfection.

Previous infection may provide some protection against future infection. However, the level of protection may vary due to factors such as declining immunity and emerging viral variants. Although COVID-19 disproportionately affects older people and people with certain underlying conditions (comorbidities) such as heart disease and obesity, it is incorrect to state that deaths from COVID-19 involving people with comorbidities were not actually caused by COVID-19, as these people would still be alive if they had not developed COVID-19. Vaccine-induced immunity is highly effective against severe illness and hospitalizations, and is safer than infection-induced immunity.

COMPLETE CLAIM: “CDC Finally Admits Massive Numbers of Americans Have ‘Natural Immunity’: 146.6 Million People”; “natural immunity is superior protection against Covid-19 than vaccinated immunity”; “The CDC reports “Covid-related deaths,” not deaths caused by Covid-19. This is because 94% of Covid-related deaths had serious underlying medical conditions, such as heart disease, stroke and diabetes”

An article published by Becker News in mid-November 2021, written by former Fox News writer Kyle Becker, claimed in its headline that “CDC Finally Admits Massive Numbers of Americans Have ‘Natural Immunity’: 146, 6 million people”. Furthermore, the article also claimed that “natural immunity is superior protection against Covid-19 than vaccinated immunity” and that 94% of COVID-19 deaths are not actually caused by COVID-19 because the deceased had comorbidities. Becker News has been classified as a dubious source by Media Bias/Fact Check for publishing conspiracy theories and inaccurate information. The article received more than 2,200 engagements on Facebook, according to social media analytics tool CrowdTangle.

The rehashed article a claim from August 2020 that deaths from COVID-19 involving people with underlying health conditions (comorbidities) were not actually caused by COVID-19. As explained by Health Feedback here and here, this is false and stems from a misunderstanding of cause of death and comorbidity. A cause of death is the disease that initiates the chain of clinical events that results in death. A comorbidity is a condition or illness that lowers a person’s overall health and makes them more susceptible to other illnesses. An example in the context of COVID-19 is asthma.

But a comorbidity does not always result in death. In fact, many people with asthma live a normal lifespan. Therefore, deaths from COVID-19 in people with comorbidities are always caused by COVID-19, because a person with comorbidity would still be alive if they had not developed COVID-19.

It’s also important to keep in mind that not all of the comorbidities recorded for 94% of COVID-19 deaths were pre-existing conditions unrelated to COVID-19, such as heart disease, stroke, and heart disease. diabetes. As a Johns Hopkins epidemiologist Justin Lessler explained in This articlecomorbidities can also arise as a result of COVID-19 itself, such as respiratory failure.

The article’s claim that 146.6 million people in the United States have “natural immunity,” or infection-induced immunity, is based on a figure reported by the US Centers for Disease Control and Prevention (CDC) representing the estimated total number of SARS-CoV-2 infections. That number stood at 146.6 million at the time of this review’s publication. Becker did not define what he meant by immunity, although the word is defined by Merriam-Webster as protection against disease.

Based on this definition, Becker’s hypothesis is not supported by scientific evidence for several reasons. First, we know that a certain proportion of previously infected people are re-infected, based on scientific studies[1-3]. This means that not everyone who was previously infected develops immunity to the disease. Reinfection studies that were completed before the Delta strain became globally dominant found that reinfections were rare. A study in Ohio and Florida reported that of 8,845 people infected, 62 became reinfected (0.7%); of these 62, 31 had symptoms of illness[2]. Another study in Lombardy, Italy, reported that five people were reinfected among 1,547 COVID-19 patients (0.3%)[3].

But the emergence of virus variants like Delta has dramatically changed the game. For example, the Delta variant is more contagious than the original strain—UK data in November 2021 provided evidence that the Delta variant is more likely to cause reinfection than other strains of SARS-CoV-2. It also suggests that immunity developed against one strain does not always protect equally well against another.

Furthermore, there is also scientific evidence suggesting that immunity decreases over timeat least on the basis studies that track the amount of antibodies in the blood over time. However, antibody levels are only one way to determine protection; other components of the immune system, such as T cells, also play an important role in immunity against viral infections as discussed by Health Feedback here. Since the factors that determine protection against disease, which scientists call “correlates of protection“, are still unclear, it is unclear whether the level of antibodies alone is sufficient to establish immunity.

Nor is it true that “a staggering 146.6 million people have been infected with and survived the Sars-CoV-2 virus,” as Becker claimed. That would mean everyone infected survived, but we know that’s not true because COVID-19 doesn’t have a 100% survival rate. In fact, the New York Times reported more than 700,000 deaths from COVID-19 in the United States in early October 2021.

The article’s claim that ‘natural immunity is superior protection against Covid-19 than vaccinated immunity’ is based on two studies, one pre-printed by scientists in Israel[4] and a study published by scientists in the United States[5]. The claim exaggerates the scientific confidence for the first study and misrepresents the second.

While the study in Israel reported fewer infections in previously infected people compared to vaccinated people, the study was also affected by various biases, such as selection bias and Survival bias. The weaknesses of the study were explained in this talk directed by James Lawlerinfectious disease expert and associate professor at the University of Nebraska, as part of weekly university meetings with local and national public health officials.

For example, Lawler pointed out that the vaccinated group in the study included more less healthy people, such as people with cancer (selection bias). This is to be expected, given that vaccination campaigns against COVID-19 have generally prioritized high-risk groups such as those in poorer health. In addition to an overrepresentation of high-risk people in the vaccinated group, the study design meant that it excluded unvaccinated people who contracted COVID-19 and died (survival bias). In short, the unvaccinated and vaccinated groups differ in many ways that are unrelated to their vaccination status, so a comparison of the two may not provide meaningful information.