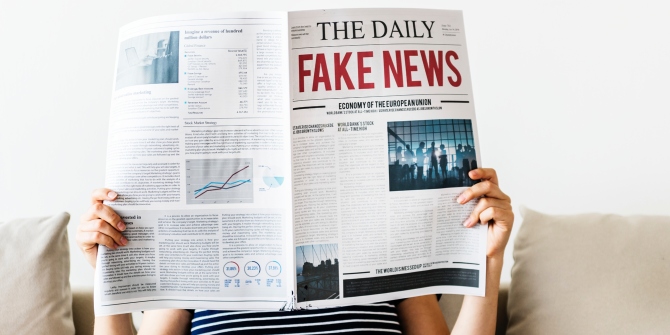 America’s mainstream media may be more biased than you think

Hardly a day goes by without President Trump launching an angry tweet referencing “fake news” media. But what do we know about real political biases in the media? Eric Merkel studied 400,000 news stories published over three decades and found that the tone of economic news is more favorable during Democratic presidencies compared to Republican administrations.

Since even before his election more than two years ago, President Donald Trump and his Republican surrogates have made a habit of responding to critical media coverage with allegations that mainstream news articles are “fake news.” . This allegation, no matter how often it is repeated, has proven to be fundamentally baseless.

However, there has also been a long history of complaints from conservative elites that journalists are biased against conservatives and the Republican Party in their reporting for mainstream news outlets. There is evidence that most journalists identify with the Democratic Party and as ideological liberals. Therefore, these claims cannot be so easily dismissed.

In new research, I find evidence of considerable bias against Republican presidential administrations in the content of mainstream economic news.

Perspectives on Partisan Bias in the Media

Scientific research on partisan media bias has a history almost as long as conservative complaints about such bias. There are reasoned arguments that underlie a number of different perspectives. Some researchers have argued that we might expect coverage to be biased in to favor conservatives because of corporate concentration in the news media. Others argue that publishers have the ability to steer news content towards the tastes of readers at their outlet, so we should expect biases to vary accordingly.

These perspectives implicitly minimize the role of journalists in subtly shaping content in ways they deem appropriate. They can do this by deciding which perspectives to emphasize or understate during the writing of a story – known as framing. This process can be shaped by a number of different factors, but one of them could well be the values ​​and perspectives brought by the individual journalist.

How would we know if journalists allow their values ​​and partisanship to affect the content of their content? There is no straight answer to this question. The crux of the matter is that negative or positive coverage can be deserved based on the performance of politicians from the Democratic or Republican parties. For example, one might expect a lower tone than usual to be directed against the Republican Party during the 2008 financial crisis because it controlled the White House. Conversely, a balanced hedge can be considered biased if the performance between the parties was anything but equal. It would be hard on the credulity to expect equal treatment of the Democratic and Republican parties in corruption-related stories under the current administration.

To solve this problem, I examine the content of economic news. I argue that this content is likely to be biased if it is consistently more positive during Republican or Democratic presidencies same taking into account the objective economic conditions. To test this proposition, I downloaded over 400,000 news reports on unemployment and inflation between 1985 and 2013 from the Associated press newswire and an assortment of high-circulation newspapers, including leading national papers like the New York Times and the USA todayand those with a history of Republican Party endorsement, such as the Dallas Morning News and the San Diego Union-Tribune. 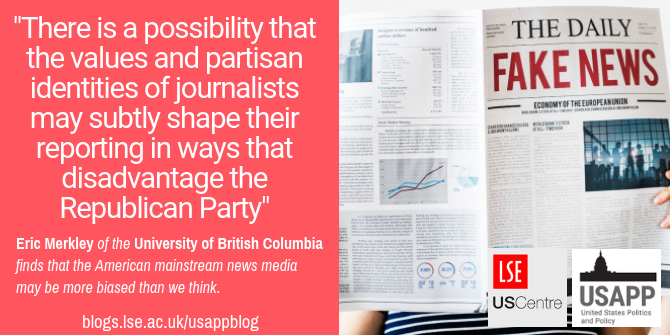 Photo by rawpixel on Unsplash

I measure the tone of news content in these articles using the Dictionary of feelings Lexicoder, which allows me to count the number of positively and negatively charged words in each article in order to construct corresponding tones. From there, I create measures over time of the tone of unemployment and inflation coverage for my sampled media, averaged quarterly. Armed with this data, I estimate what we expect from the tone of coverage under Democratic and Republican administrations with equivalent levels of economic performance.

I find unemployment news content to be about 12% more favorable during Democratic presidencies. The equivalent number for inflation coverage is 18%. Figures 1 and 2 below plot the tone of unemployment and inflation coverage, respectively. The dotted red line displays the estimated mean tone during Republican administrations after controlling for economic performance, while the dotted blue line shows the equivalent for Democratic administrations. 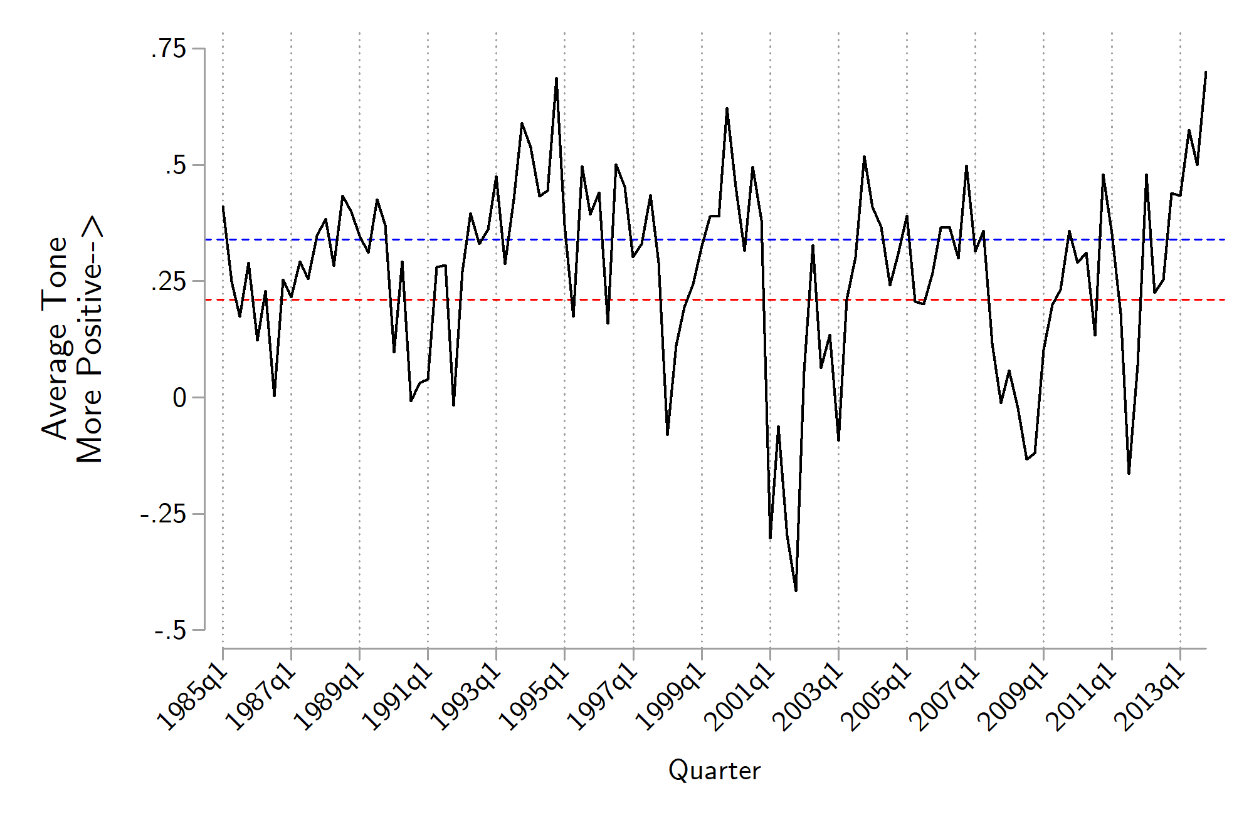 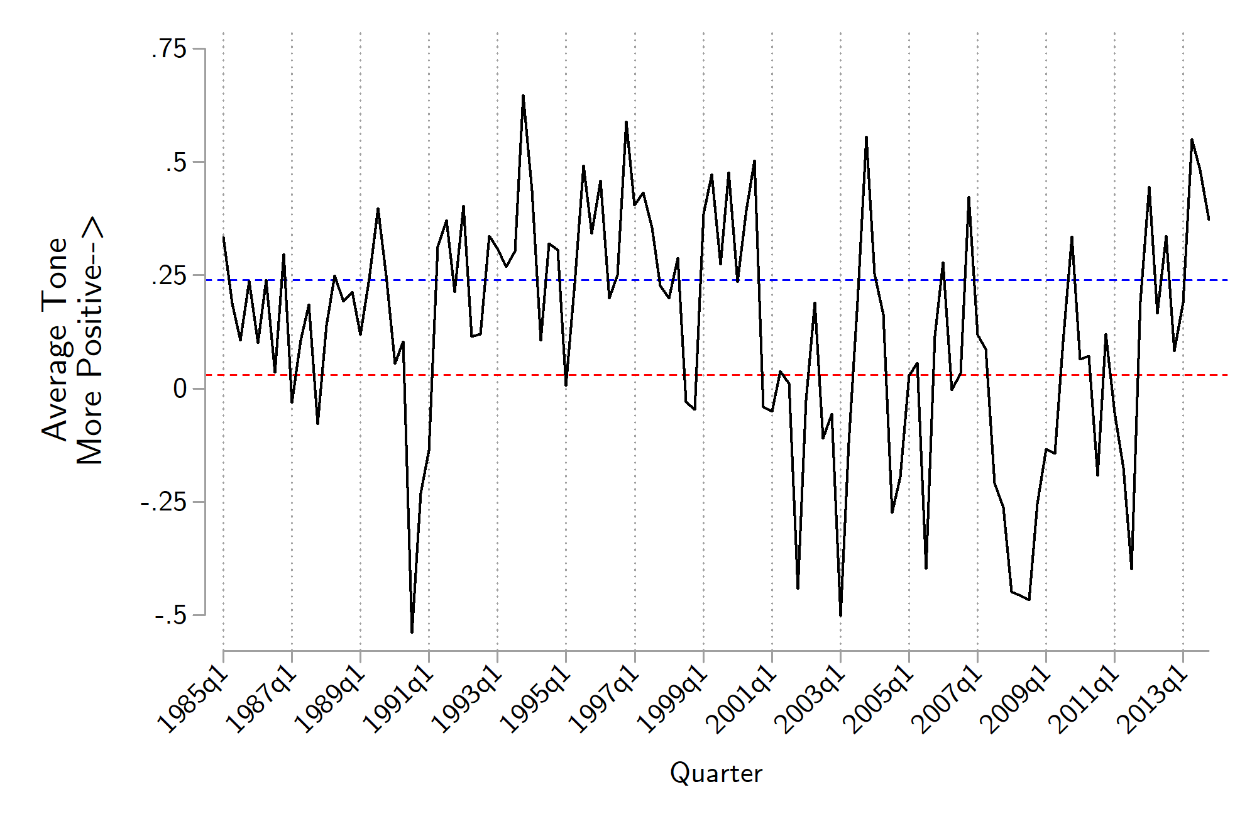 With this in mind, we might expect journalists to react more negatively to deteriorating short-term economic conditions during Republican presidencies if there is partisan bias in the news media. So how much do we expect the tone of coverage to change in response to a 0.5% increase in the unemployment rate for Democratic and Republican administrations with the same starting unemployment rate?

I find that only Republican administrations are treated with more negative coverage in response to short-term increases in unemployment or the rate of inflation. These results are illustrated in Figure 3, which plots the estimated change in average media tone in response to changes in the unemployment rate (left panel) and inflation rate (right panel). If the news media is a watchdog of deteriorating economic conditions, it only seems to do so during Republican presidencies.

Figure 3 – Estimated change in media tone in response to changes in unemployment rate (left) and inflation rate (right) for Republican and Democratic administrations. 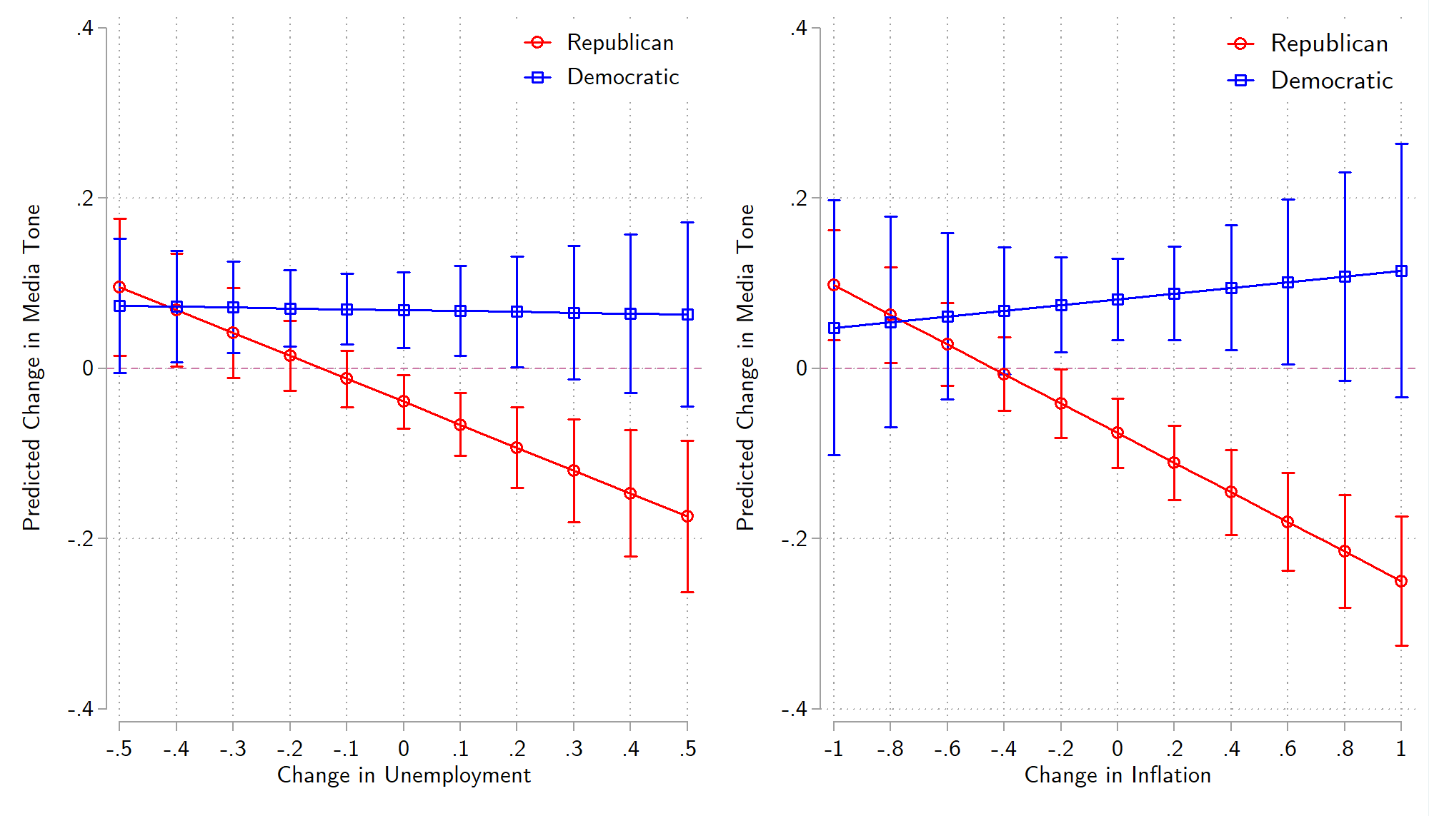 My findings suggest that there may well be something to these complaints. But this research is far since the last word on this issue. It is part of a vast academic literature littered with mixed results resulting from a wide range of methodological approaches. Future research should continue to examine the tone of news coverage – a feature of news content closest to the heart of conservative objections – with an eye to empirical strategies that allow us to account for systematic differences in performance. parties.

Many will no doubt find these results disturbing, especially in a heated political climate where the mainstream media is constantly besieged by rhetoric. It is possible, however, that the values ​​and partisan identities of journalists subtly shape their reporting in ways that put the Republican Party at a disadvantage. This is something we can recognize while appreciating that most journalists do a very difficult job well and that mainstream media is essential to a healthy democracy.

Note: This article gives the point of view of the author, and not the position of USAp– American Politics and Policy, nor of the London School of Economics.

Breaking News: Article 370 and 35(A) revoked: how it would change the face of Kashmir